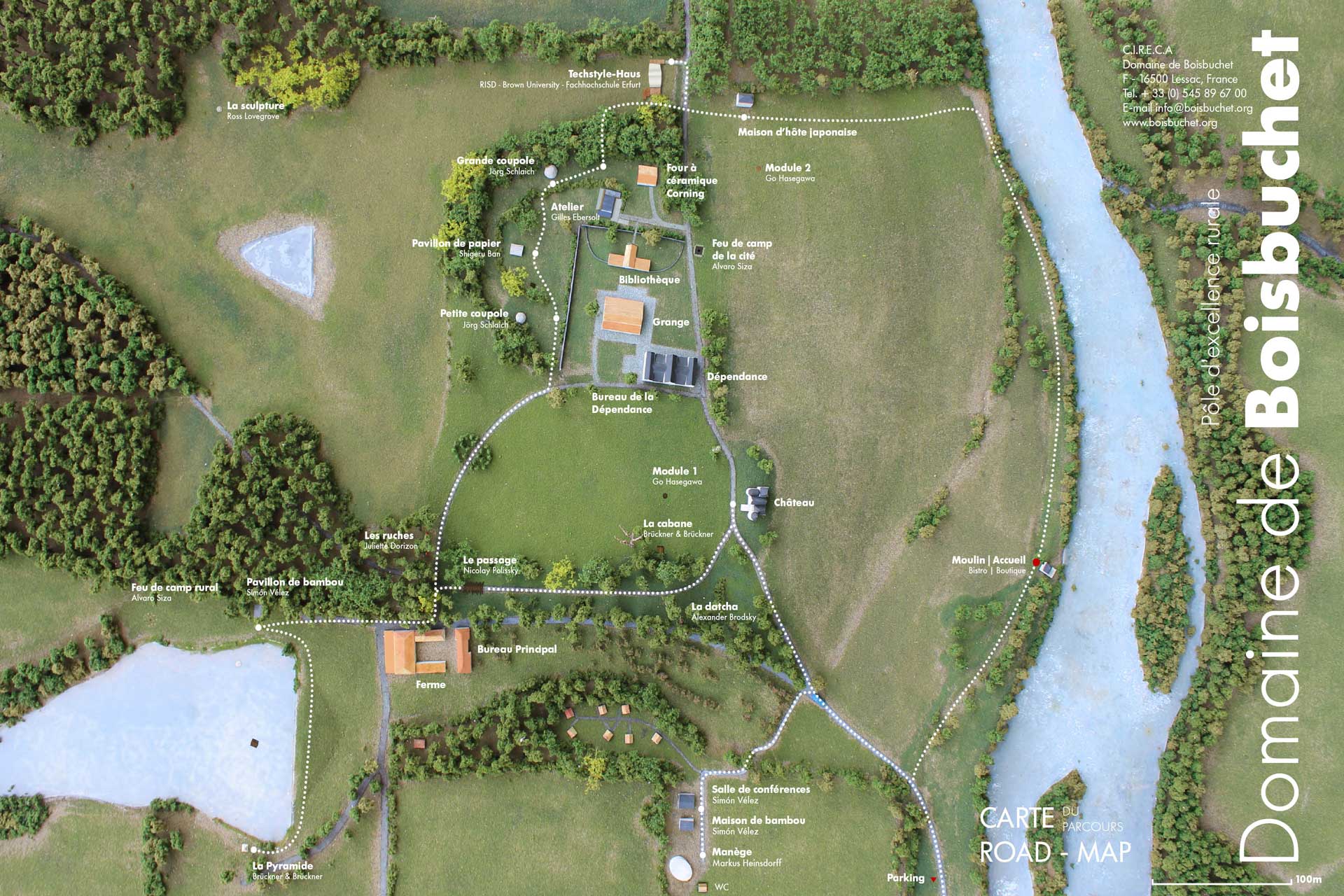 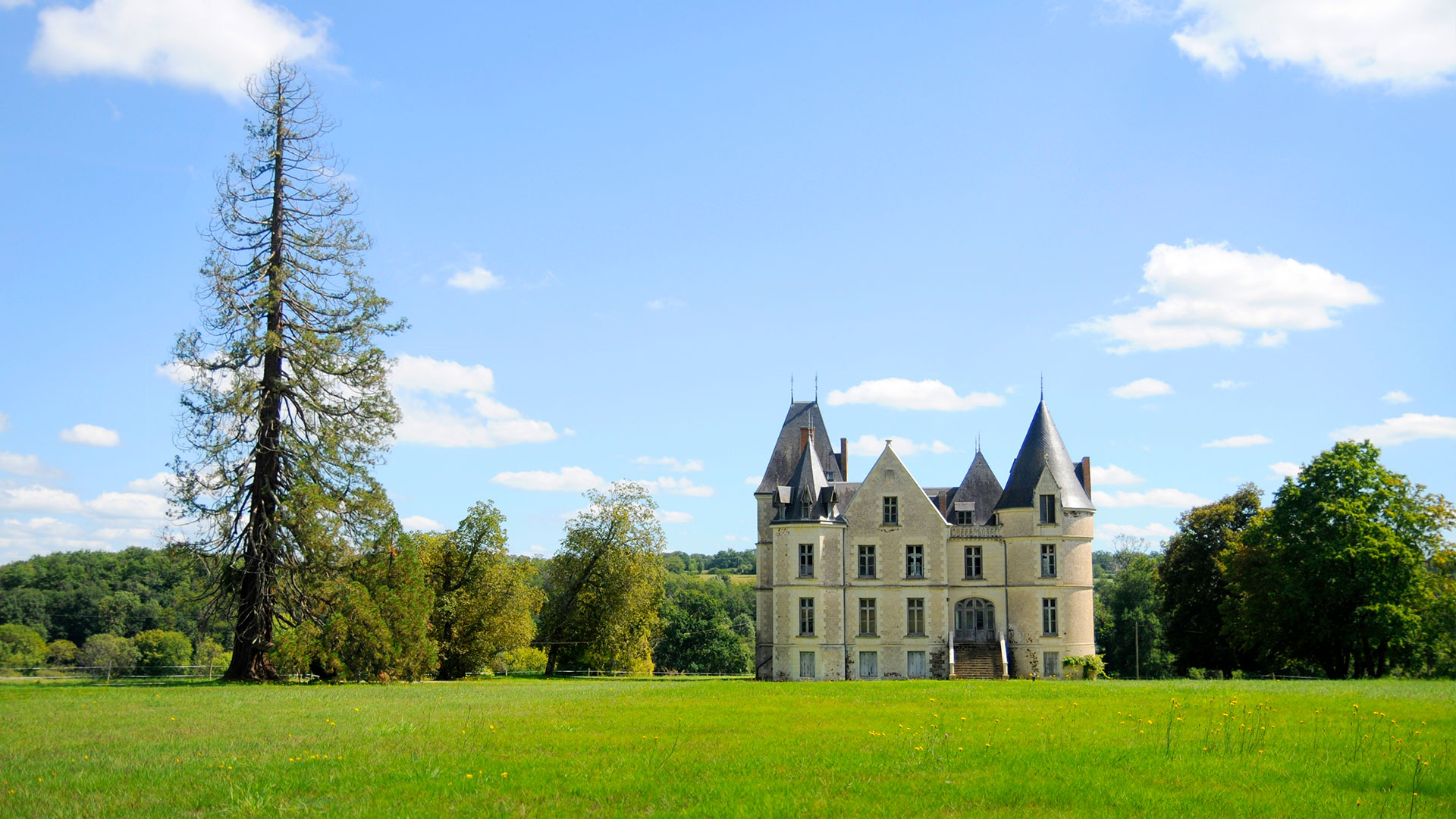 Built on the site of two previous structures from past centuries, the current Chateau at Boisbuchet presents itself on a hill overlooking the Vienne river as a typical 19th century manor. The historicist building, is composed of five interlocking volumes of varying shape and size. After having been ravaged by squatters and standing vacant for years, it is now in the process of being carefully restored, starting with a comprehensive repair of the roof in 1991 by Vilnius Technical University. Supported by governmental funding, two stories have been renovated to house temporary exhibitions. 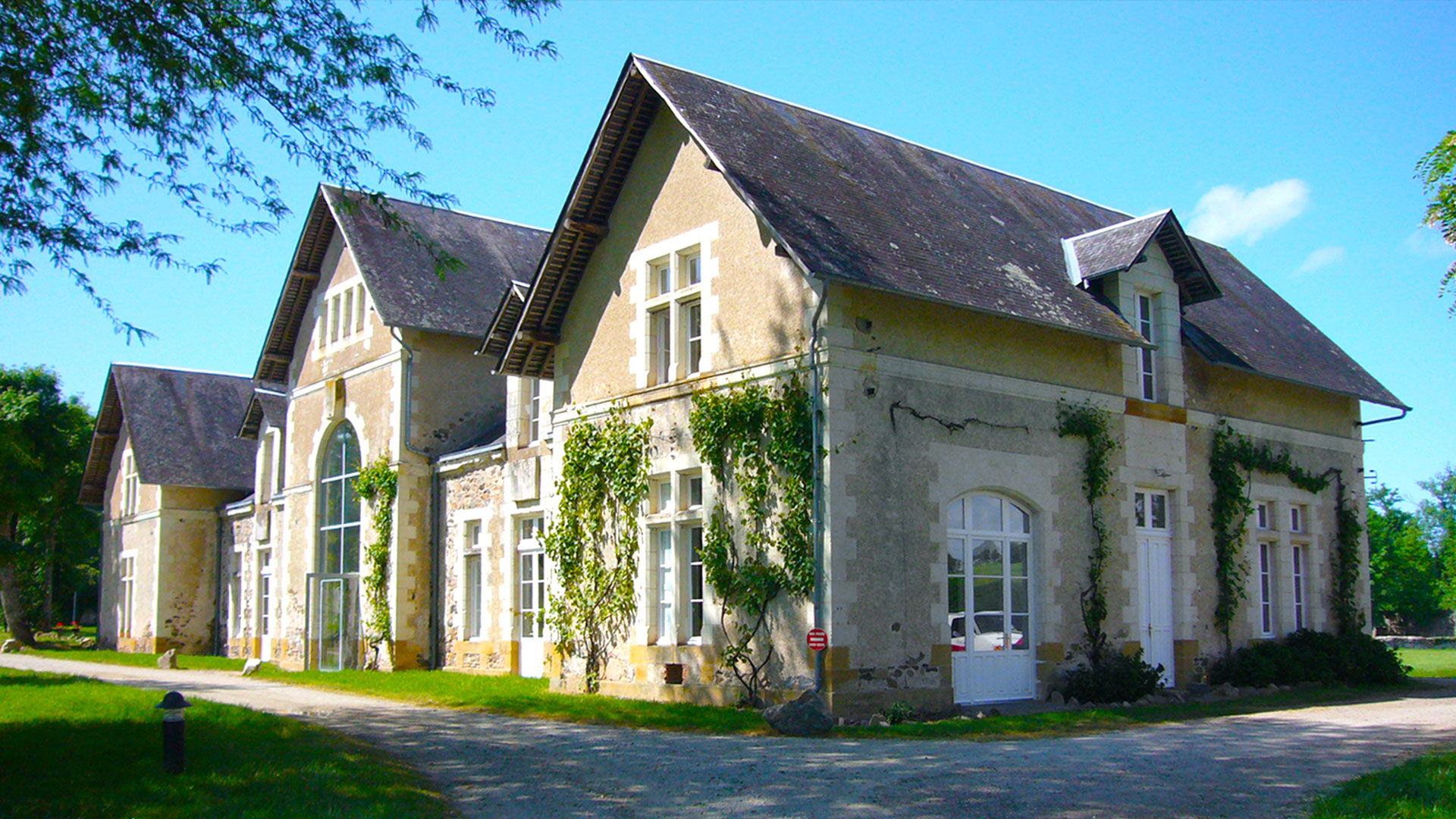 Constructed around 1860, it originally served as the administrative building for all the farms associated with the Domaine with stables, laundry, granary etc. Today it contains guest rooms, sleeping quarters, offices, internet and conference rooms as well as some galleries. 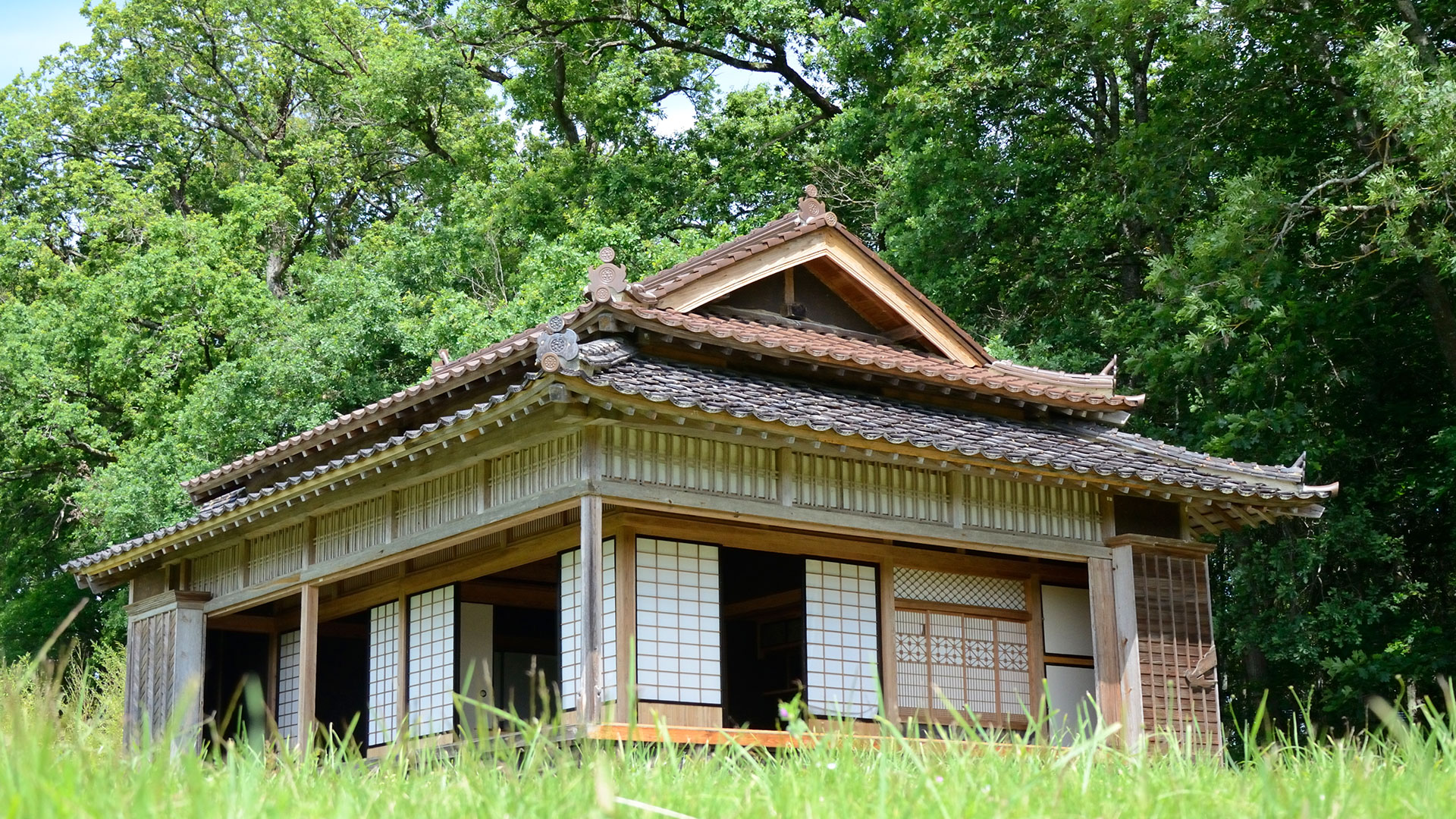 Once part of a large estate in the Shimane prefecture in Western Japan, the traditional guesthouse (Kyakuden) was constructed in 1863 – the same period as the Chateau at Boisbuchet. Offered as a gift by the Japanese Kominka Research Society, it was dismantled, documented and restored in its original location in 2008, then brought to the Charente, where it was faithfully rebuilt by a team of Japanese craftsmen. Assembled without nails or screws, the wood and clay structure encompasses two large rooms and an L-shaped corridor, which are divided from one another by shojis. 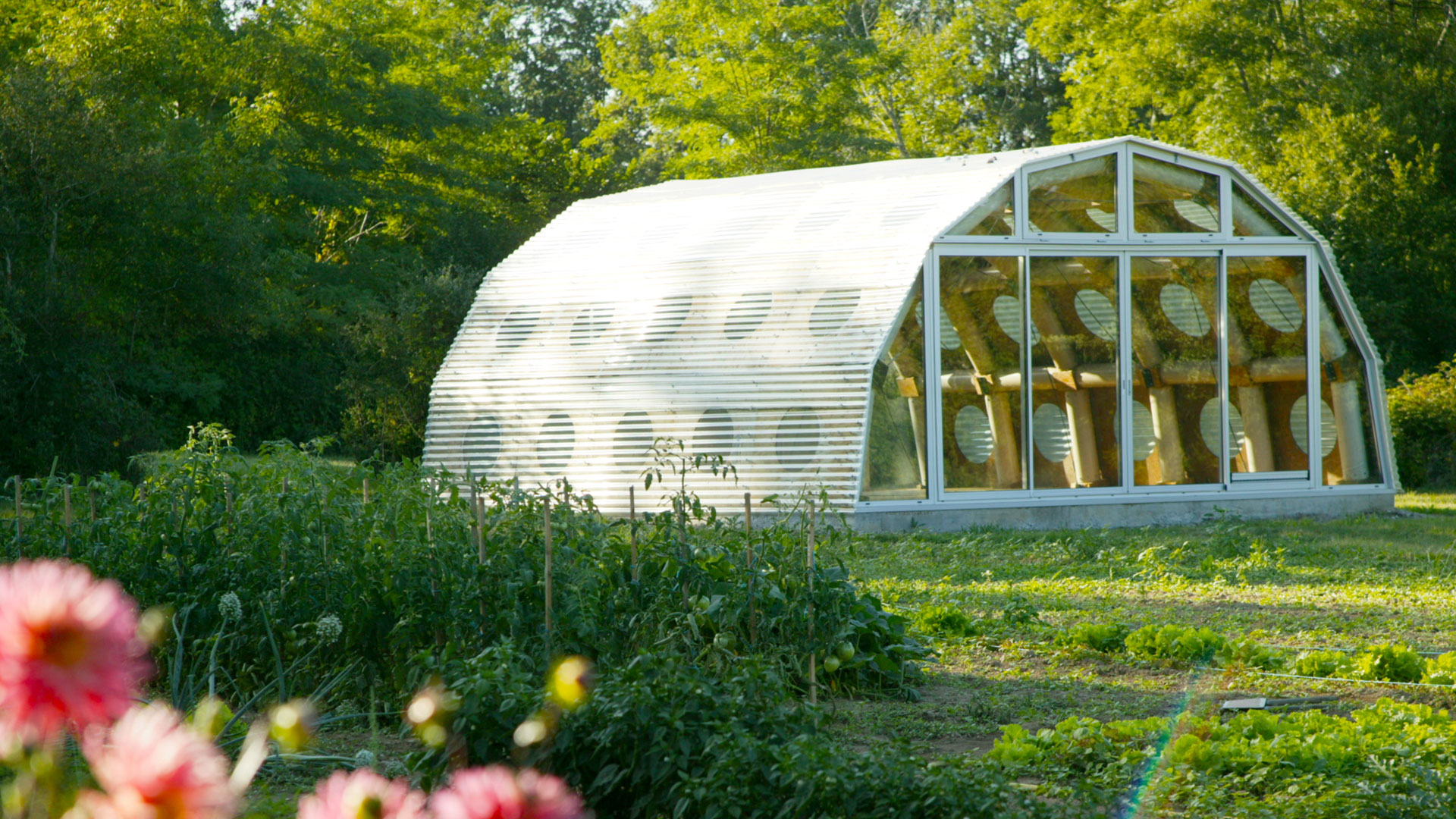 With this pavilion, Shigeru Ban, winner of the Pritzker Prize 2014, realized his first permanent building in Europe. He utilized wooden connections and tubes made of recycled paper similar to the Japanese pavilion he had created a year earlier for Expo 2000. Erected atop a concrete base on the central axis of an old fruit garden, the structure was later enclosed with aluminum and glass facades to allow year- round use. The original covering of corrugated fibre glass sheets was replaced with a translucent tarpaulin.

This fully energy-autonomous, solar-powered house has been developed by students from Rhode Island School of Design and Brown University, both in the USA, and the University of Applied Science of Erfurt, Germany, for the 2014 Solar Decathlon competition in Versailles, France. Afterwards it was moved to Boisbuchet. The Techstyle-Haus was designed to use only as much energy as a blow dryer to keep it warm in the winter and cool in the summer. This prototype building has its own intelligence. To analyze regularly the atmosphere and energy consumption, all metrics behind the architecture are constantly collected. 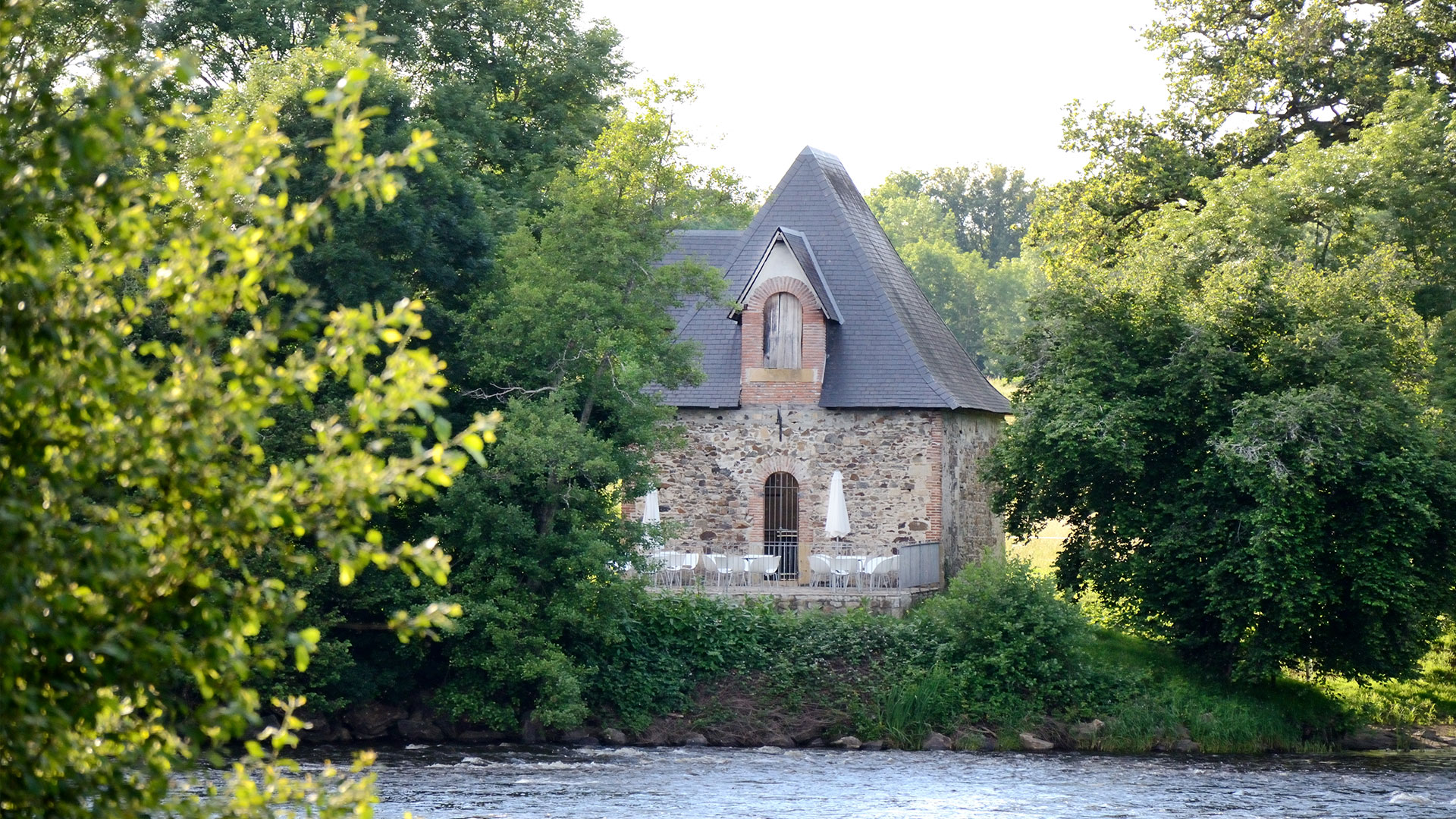 The former mill of Boisbuchet can be traced back to the 17th century, which makes it the oldest surviving structure at the Domaine. In 1993, large sections of the already damaged building were completely destroyed during a flood, including the roof which had been constructed over an elaborate oak truss in the 19th century to mimic the style of the chateau. Having made a detailed inventory and documentation prior to the flood, the Kiev Polytechnic Institute was able to completely restore the structure just a year later. With a canal running through its foundations, the building now contains the reception for the Domaine and a public bistro. 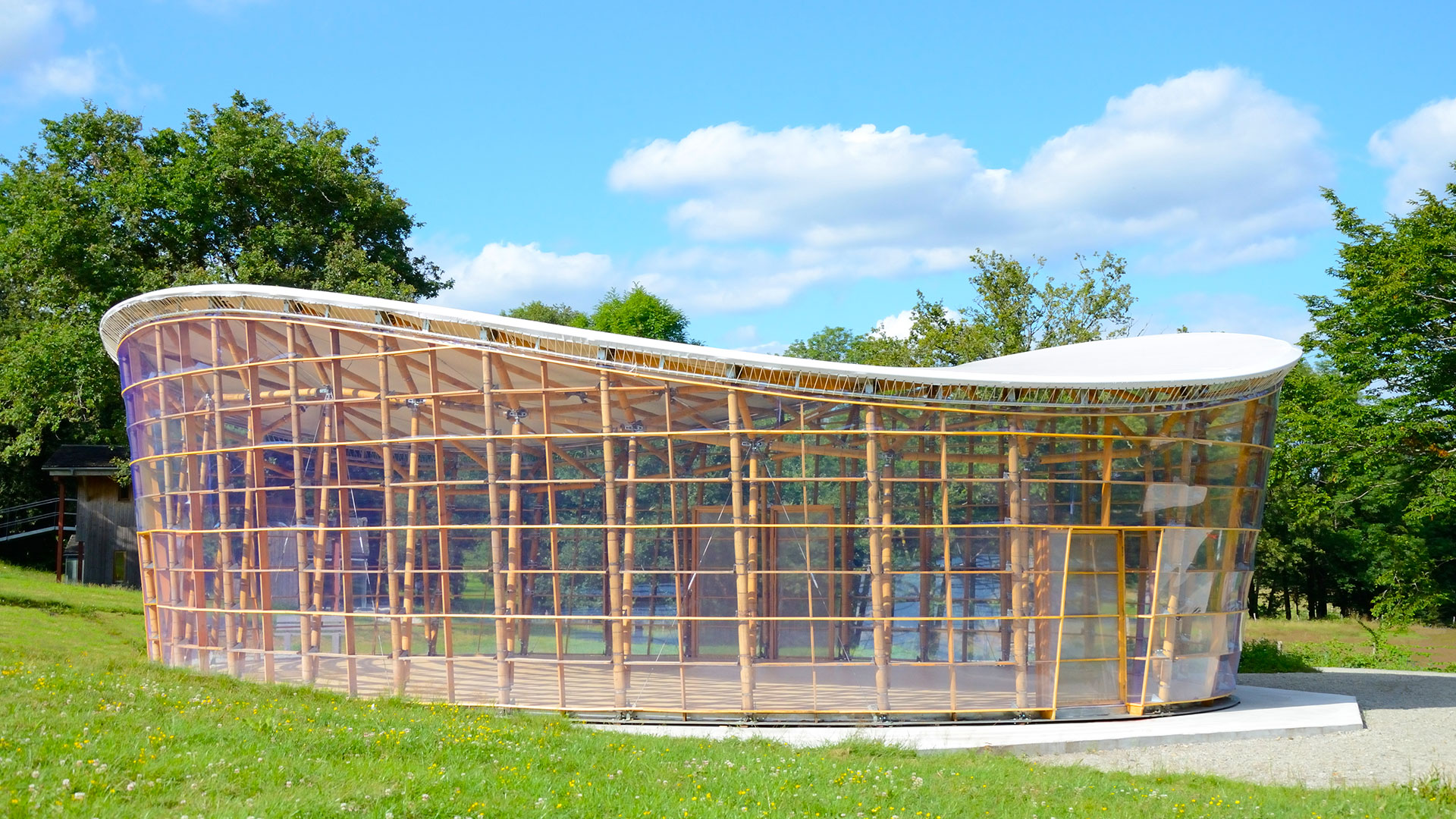 For an exhibition tour in China presenting German industry’s current technologies for sustainable urban development, the German artist and architect Markus Heinsdorff developed a series of bamboo pavilions in 2007, with this building as the centrepiece. As a gift of the Goethe Institute and the People’s Republic of China, the pavilion was transferred to Boisbuchet upon conclusion of the tour. For the support structure, Heinsdorff used tubes and plywood made of bamboo helt together with special steel fittings. Membranes made of polycarbonate serve as the roof and wall surfaces. 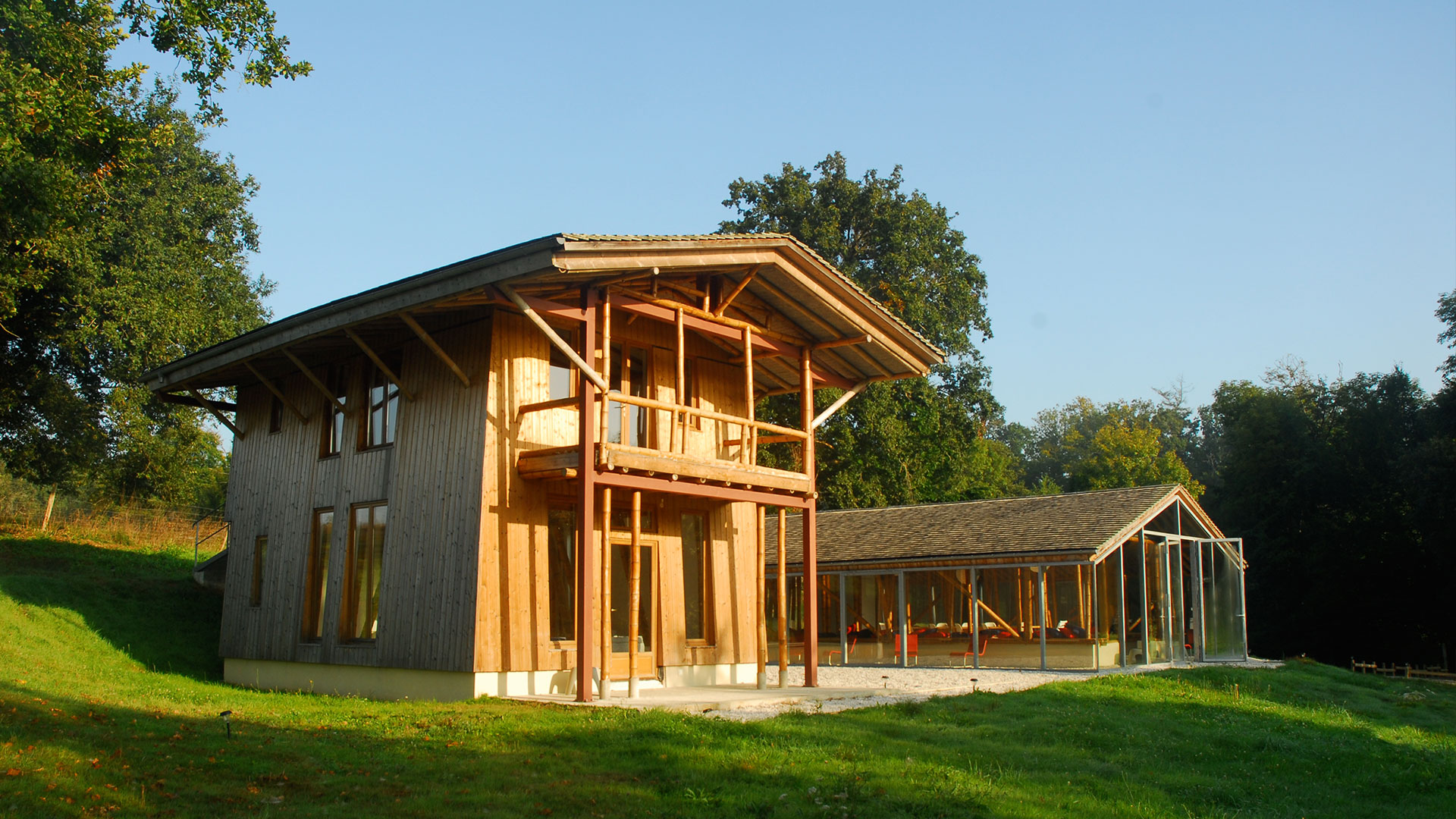 The Bamboo House and the Bamboo Conference Pavilion

Columbian architect Simón Vélez built the house together with students on his second visit to Boisbuchet in 1999. For this two-storey guest house he employed a new technique: Vélez filled the hollow chambers at the pole’s junctions with concrete and inserted metal rods as connectors. In 2000, Vélez repeated his innovative use of concrete and metal connections in an adjacent conference space for 40 people. 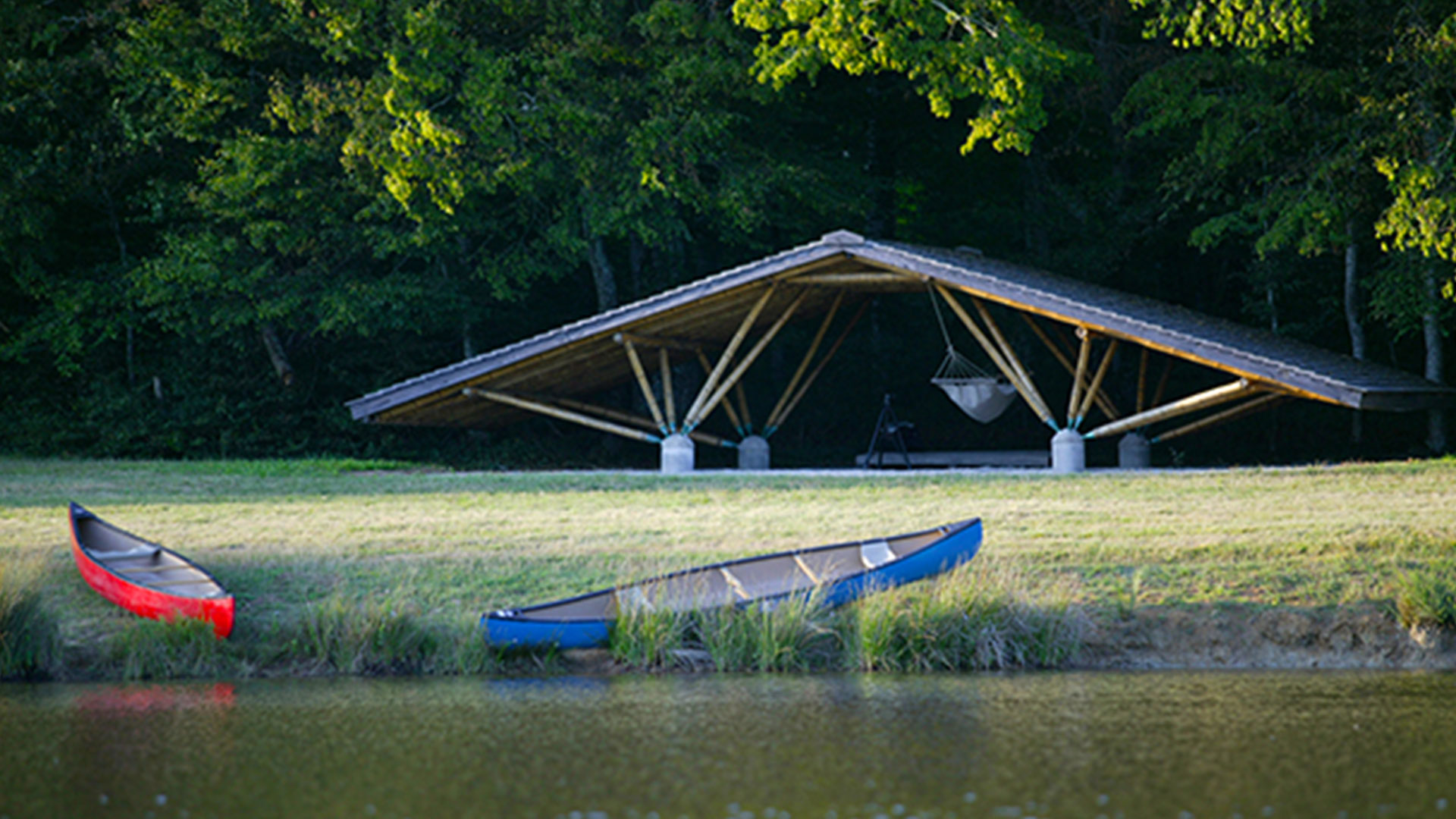 For this pavilion created in 2001, Colombian Architect Simón Veléz utilized bamboo from his native country, as the thin poles of European varieties could not withstand the construction method developed by Vélez. The roof with its supports bundled in four pad foundations (with plastic bottles as the moulds for the end pieces) recalls the wings of old airplanes and lends a floating element to the building, which functions as a shelter from sun and rain. 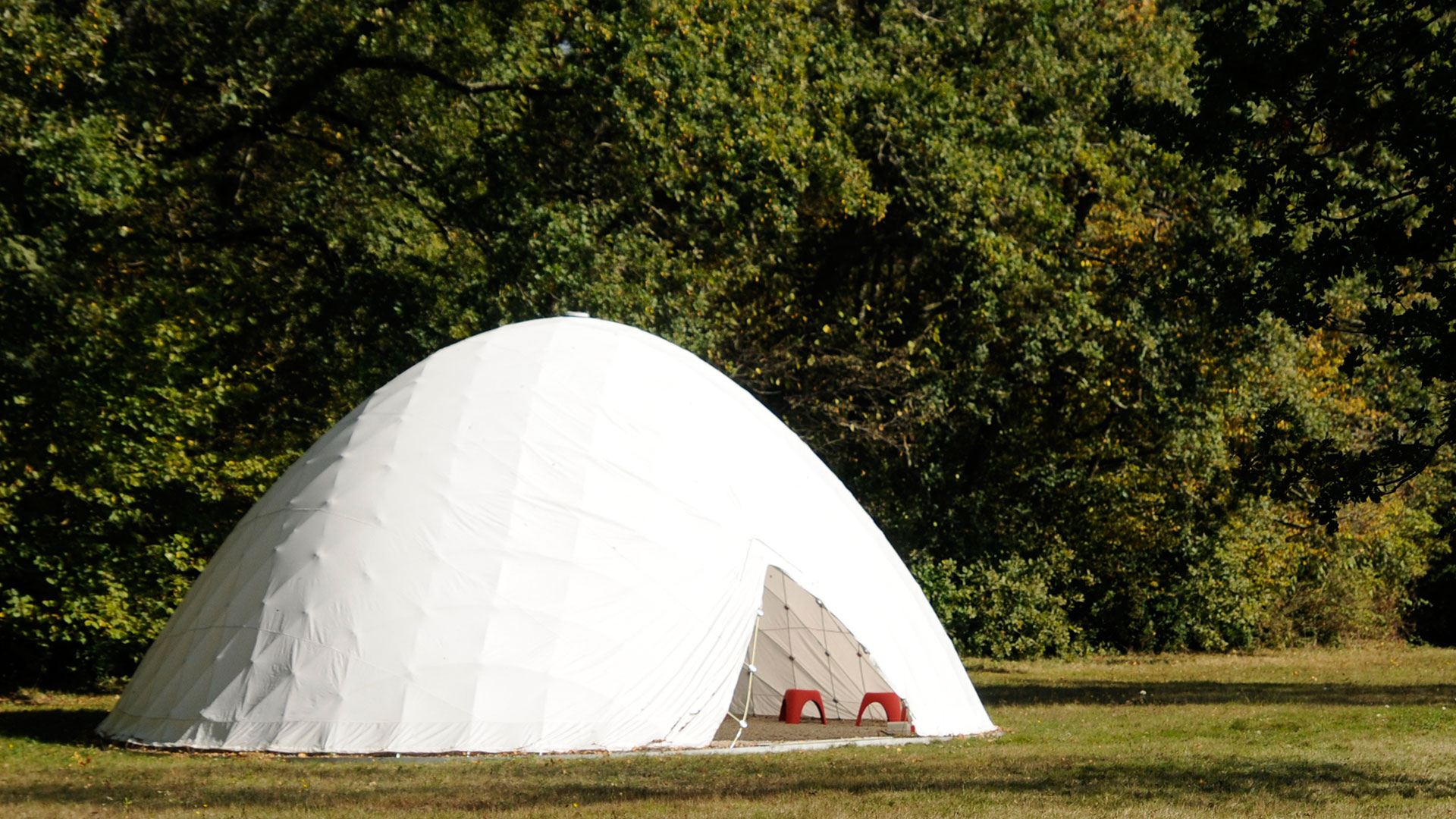 The Bamboo and the Fibreglass Dome

The small bamboo-dome structure (top) from 2006 by the engineer and architect Jörg Schlaich, who developed the Olympic Stadium decades earlier in Munich with Frei Otto, pays homage to the lightweight design of tensile structures and to bamboo as a material. The 30% larger variant of the dome was built in 2009 and consists of fiberglass rods connected with specially manufactured aluminum sleeves and spanned with a tear-resistant, weatherproof and translucent membrane. 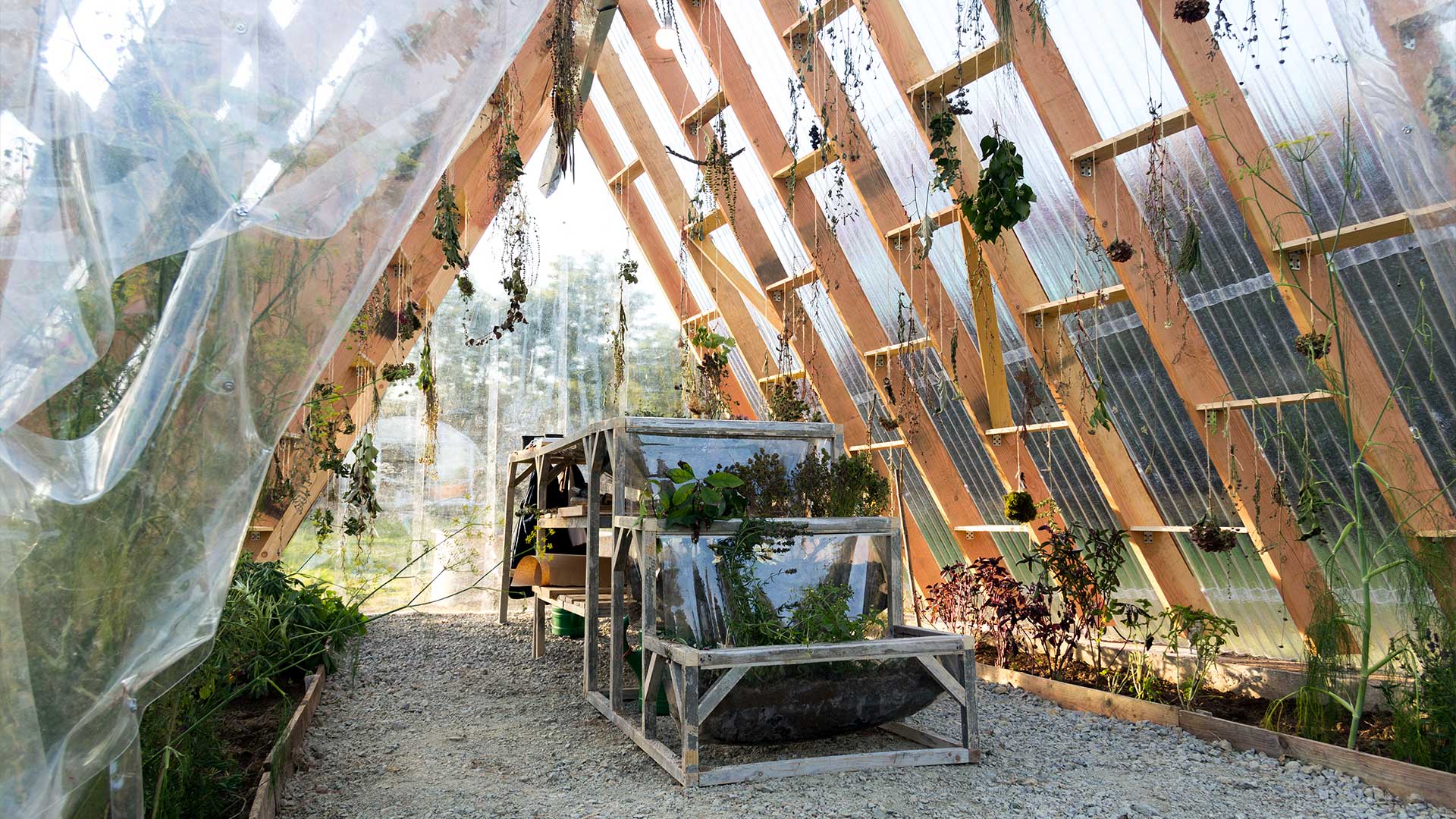 Created in 2017, in a workshop directed by French-Lebanese architect Lina Ghotmeh, Boisbuchet’s greenhouse sits in the central axis of the Domaine’s historical kitchen garden. The form is minimal yet complex and functional: It is a roof with one side smaller and lower that ducks out of the Atlantic winds from the west while collecting rain water in the close-by reservoir. The stabilizing truss inside accommodates shelves for pots and provides opportunities to suspend crops for drying 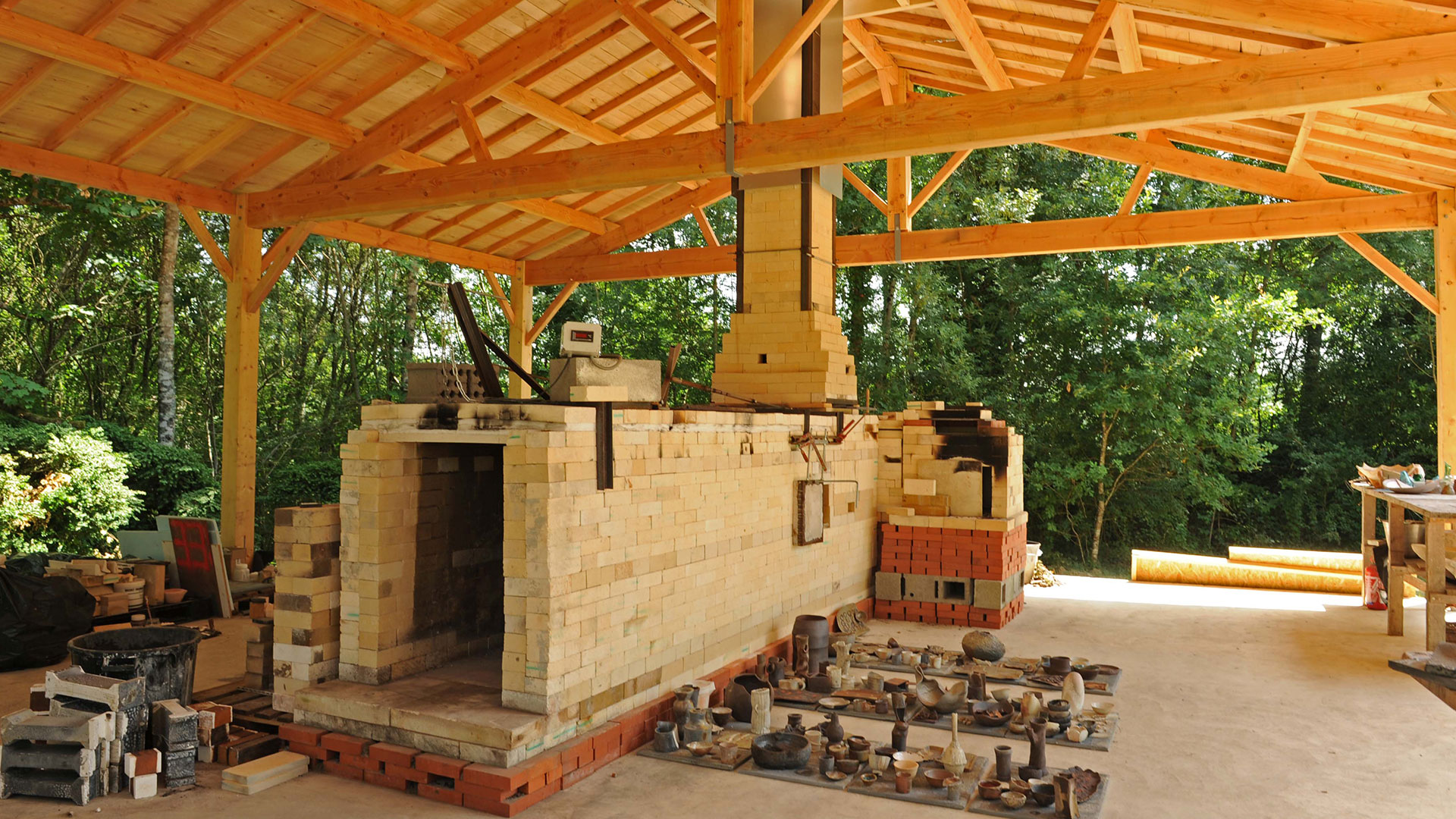 Since 2005, the Corning Museum of Glass located in New York State has led courses at the Domaine de Boisbuchet. In 2010, a special wood- red kiln was introduced for use in the workshops, developed by Corning on the basis of Korean-Japanese tradition. The technique makes it possible to fire glass,ceramic and porcelain simultaneously in a single step. Corning’s experts employed special bricks imported from the USA, which are stacked without mortar to build the kiln. The resulting flexibility makes it possible to change the form and volume of the kiln at any time.

Taking advantage of the predominant architectural grid and mate-rials, Alvaro Siza and his students de ned a communal place which completes the plaza between Boisbuchet’s Dependance, its barn and the Porcherie with a view towards the Vienne valley. 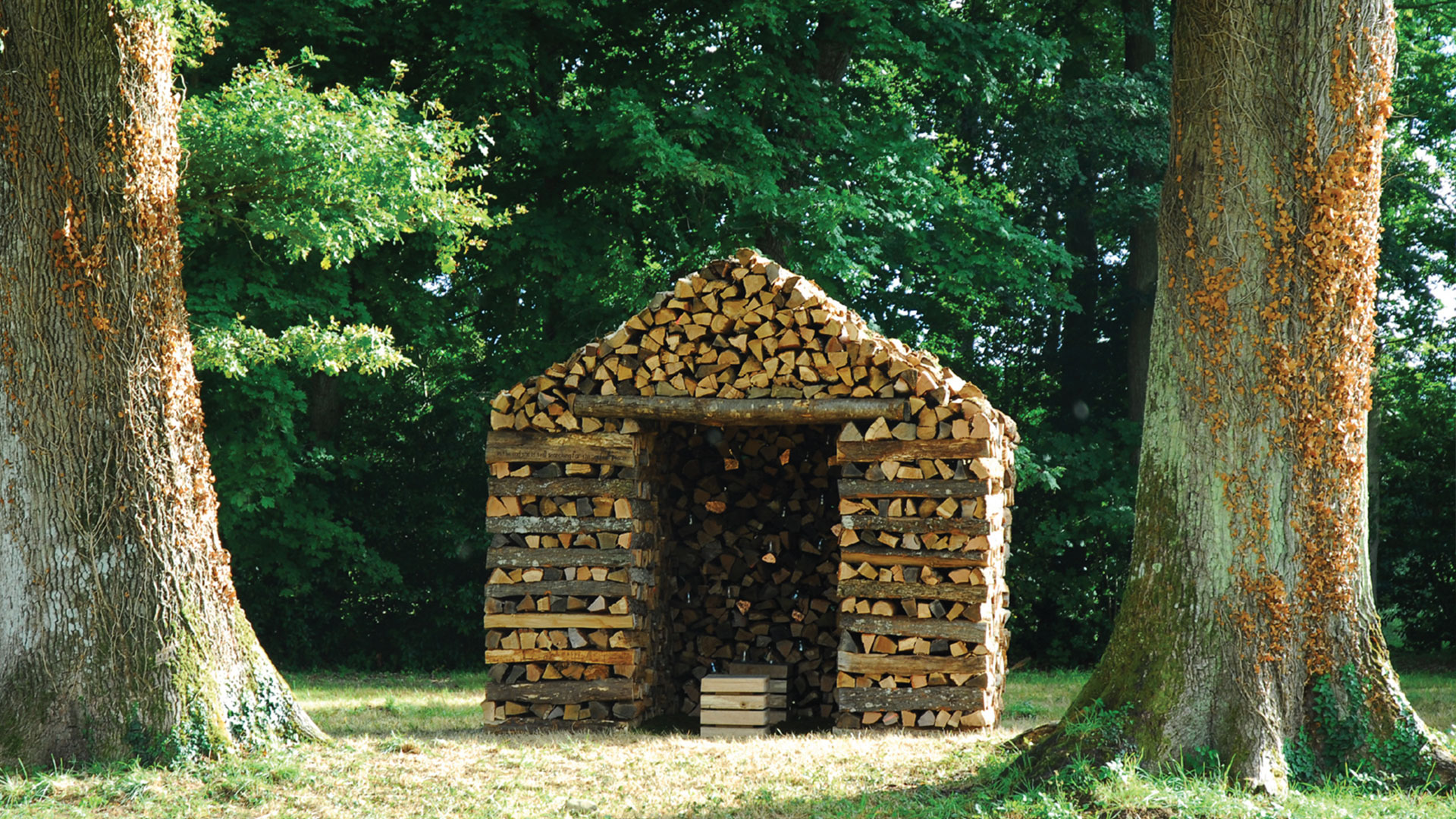 Directly situated on the central axis of the dependence from the 19th century, Brückner & Brückner constructed this log house in a 2006 workshop as the very epitome of architecture. The hut consists of carefully stacked wooden logs which are typically found as firewood stacked along Boisbuchet’s pastures.
Nearly a meter thick, the walls contain just one single cell where the points of light between the logs gleam like stars in the night sky. 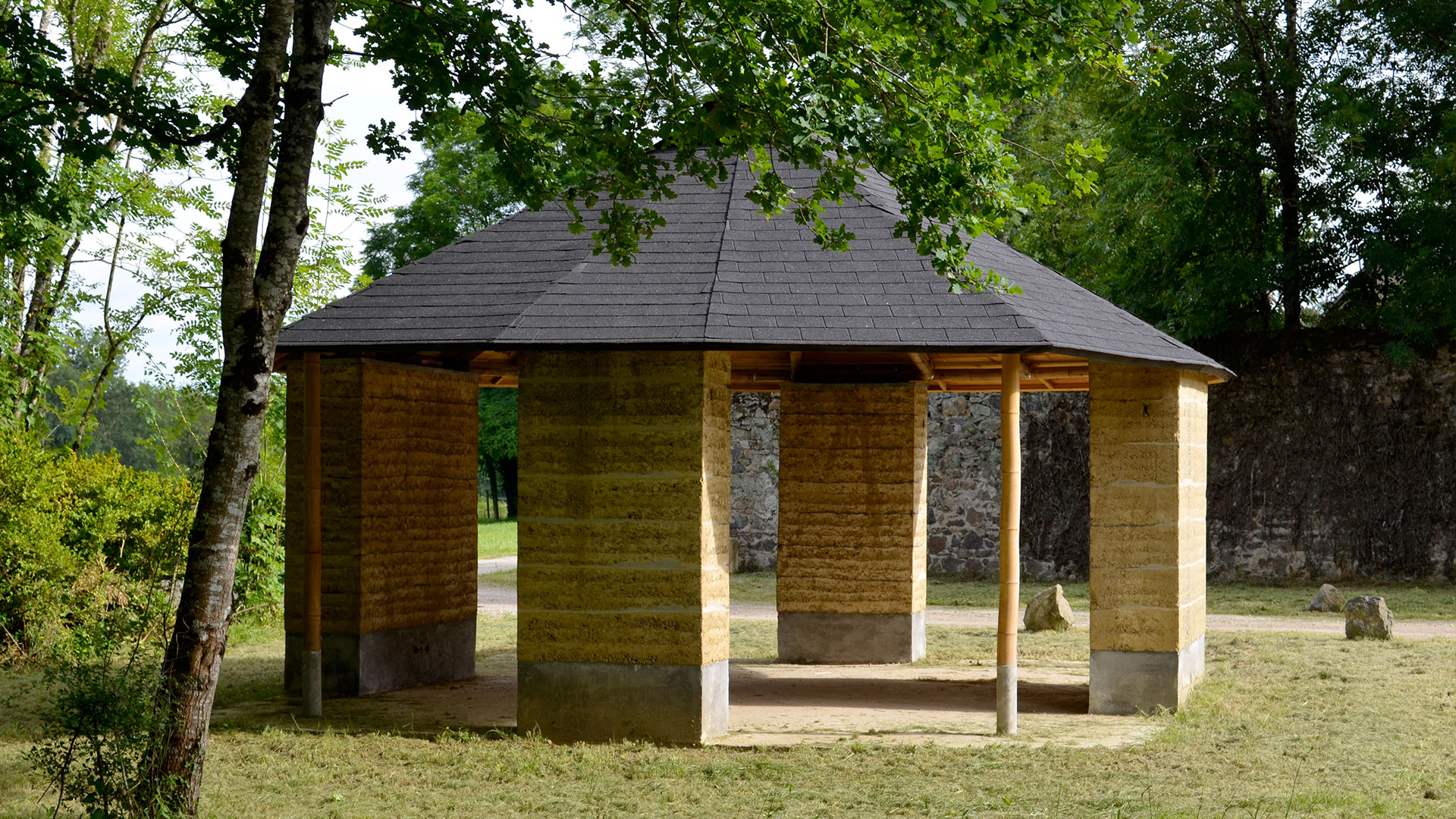 This building is an assemblage of two sustainable techniques and has been realized from top to bottom: In his workshop of 2012, Simón Vélez constructed a roof by joining bamboo poles with metal screws held by concrete which had been injected into the pole’s end segments. The structure bearing this roof had been designed by Timur Ersen and realized in his workshop in 2017. Timur erected the walls by alternating three layers of earth with one layer of cement that withstands rain and thus prevents the structure’s erosion. 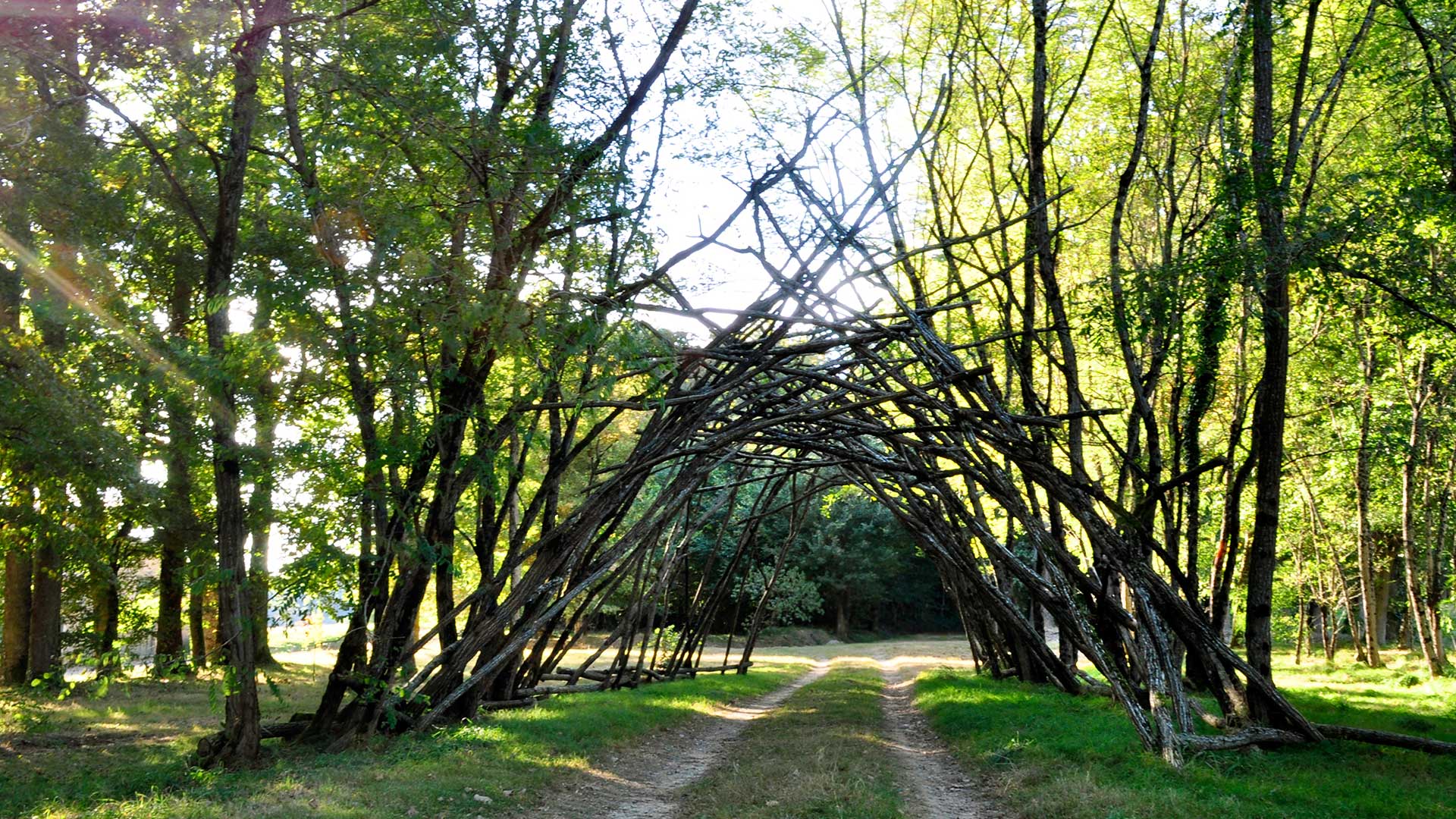 Nicolay Polissky’s workshop of 2013 created a structure where nature and man-made design intertwine. Several dozen of small acacia trunks lean against or lay over each other in order to create a tunnel that draws our attention to the architecture of nature. 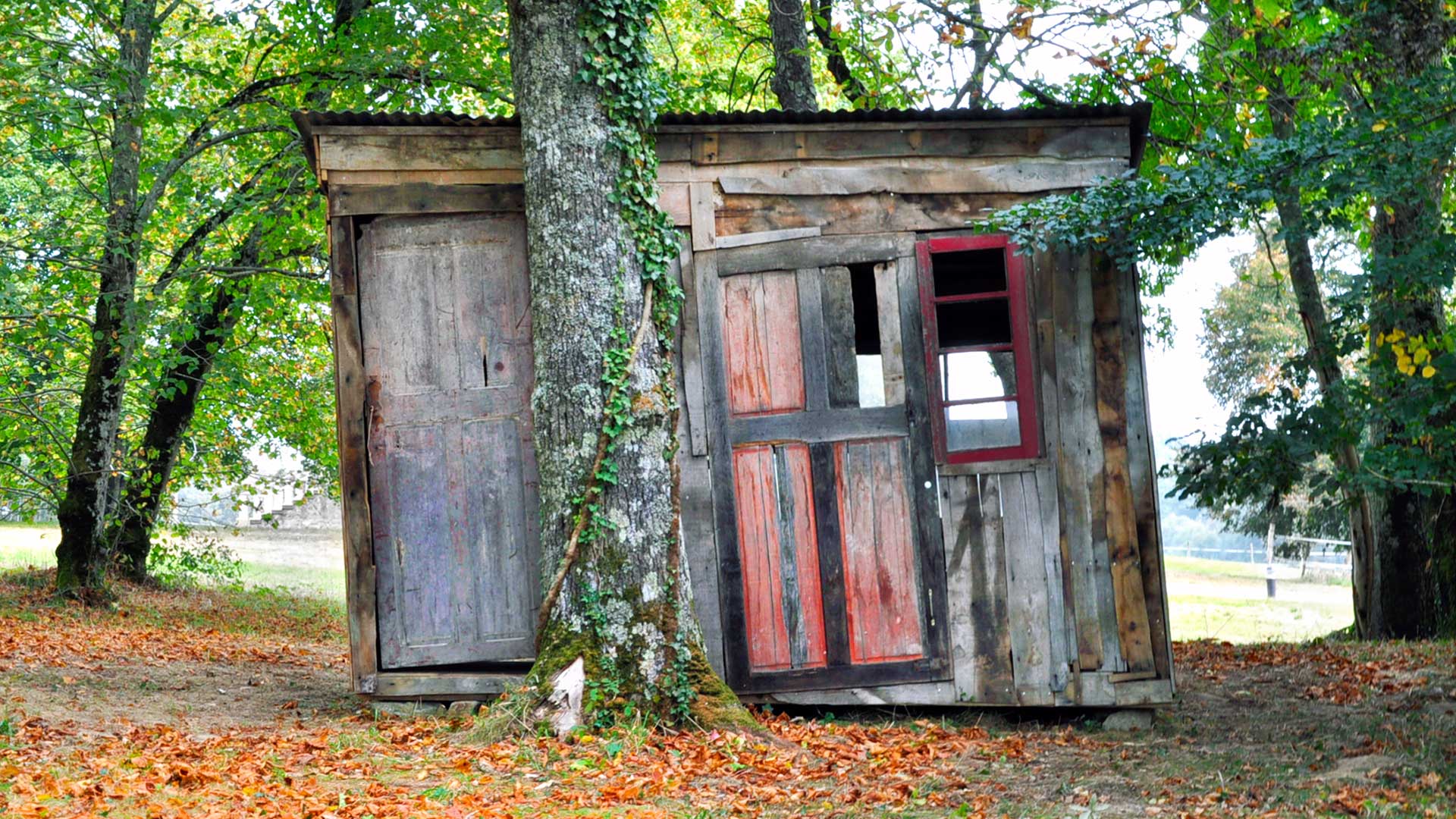 Russian architect and artist Alexander Brodsky invited Boisbuchet’s students to recycle left-overs from previous architectural work for the construction of this little lodge. Re-interpreting the material for this purpose, they integrated this hut into its environment by following the surrounding trees’ inclination.